Large retail stores, restaurants, shopping and businesses like Rockwell Collins make northwestern Coralville a hot spot for activity. As a result, high levels of activity create the need for more capacity in the roadway network. The challenge is moving these numerous vehicles as efficiently as possible in a relatively small area, while keeping traffic flowing and minimally impacting employees’ routes to work.The developer entered into an agreement with the City to lead the project but needed to get the Heartland Drive portion of improvements completed in a short timeframe. 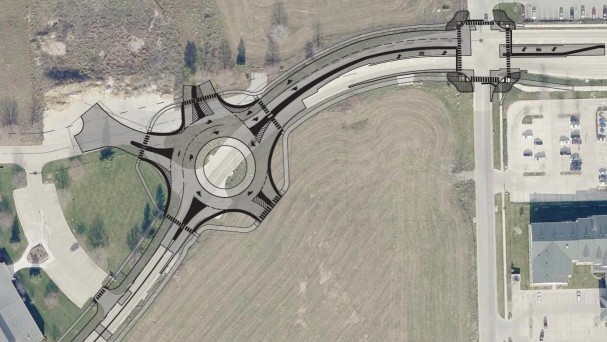 To efficiently move traffic through this busy area, along with provide access to future developments, a 5-leg roundabout was the answer. Coralville has an established, growing roundabout network throughout the city and an educated population on how they function. With this, the idea of a roundabout made sense. The roundabout allows the city to accommodate large volumes of through traffic while offering opportunity for land to be developed north and south of the roundabout. As a result, traffic can continuously flow through this area in a safe, efficient manner.

McClure was hired in early February and used an accelerated Design/Build approach that allowed the initial phases to start construction in May before the entire project was fully designed. The design team then provided the necessary deliverables in time to start each phase.

Geopak Site Modeler was used for the complicated geometric design of the roundabout, while AutoCAD Civil 3D was used for the widening portions. The finished grade surface was “stitched” together and then used to provide staking data for our survey crew.